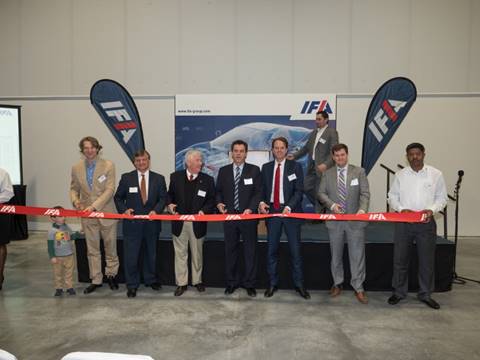 The ceremony included a welcome from Mauro Amarante, CEO of IFA North America, and remarks by Dr. Robert Gutsche, CEO of IFA Group, Felix von Nathusius, a member of IFA’s owning family, Alan Lewis of the Keith Corporation, Chad Frampton, CEO and president of Frampton Construction, and Bill Peagler, supervisor of Berkeley County. A ribbon cutting ceremony followed, along with a factory tour and brunch. Construction on the facility began in May 2017 and wrapped up in February 2018.

Mauro Amarante, CEO of IFA Rotorion North America, commented, “This high end facility is a reality because of the outstanding professionals involved in its design and construction. Zero accidents in over 99,000 hours worked! On time and under budget! Frampton went over and beyond my expectations and should be proud of their co-workers and partners. More to come! ”

The opening of the new facility, which brings with it approximately 120 new jobs, will allow IFA to add constant-velocity joint (CVJ) manufacturing to its North American business operations. Located in the Charleston Trade Center, the facility is in one of Charleston’s newest Class A industrial business parks.

To round out the project, Frampton Construction assembled a team of partners including the Keith Corporation, project developer, and McMillan Pazdan Smith, project architect.

“We could not have aligned ourselves with a better end user than IFA or a more outstanding development partner than The Keith Corporation. It has been a pleasure working with the IFA team and our partners to bring this new facility to Berkeley county. We admire and support IFA’s vision for growth and progress in the Charleston region and wish them continued success as they expand their operations here,” said Chad Frampton, president and CEO of Frampton Construction.

As one of the largest manufacturers of propshafts in the world, IFA assembles approximately two million state-of-the-art propshafts every year in Ladson, S.C. The company was established in 2002 and currently employs more than 600 people in the United States, serving many of the largest global automobile manufacturers.

Ocula: The 11 Most Anticipated Museum Openings of 2023