… and a little odd at times. Out of the ordinary at least. Perhaps it was just our luck for a few days, but Edisto Island presented itself as unusual. Maybe is was getting away from commercial development again that allowed the natural world to emerge this way. Whatever the reason, here it is.

Edisto is one of the least developed sea islands in South Carolina. Two large portions of the island have been preserved by the Edisto Beach State Park and Botany Bay Plantation. The town of Edisto Beach populates a strip between the ocean and the Edisto River and salt marshes. The homes are a mix of modest and grand, but not the high end ones like you might find on Hilton Head, which is not too far from here.  Here’s Rick’s favorite. 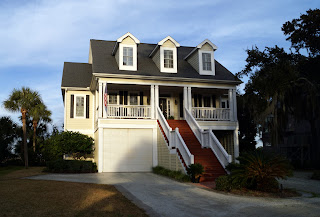 There are a few restaurants and one small Piggly Wiggly and an True Value Hardware, a couple of gas stations.  During the winter it scales way back, which suited us just fine. As we rode our bikes around town, I liked it enough to fantasize about living here, at least in the winter time.

We stayed in the State Park for three nights in site 74, with 30 amps, no sewer, and 95 feet backed up to the salt marsh and a short walk to the ocean. Our site is kind of muddy, but that only allowed us to see the evidence of what must be an army of raccoons using the puddles as wash basins. 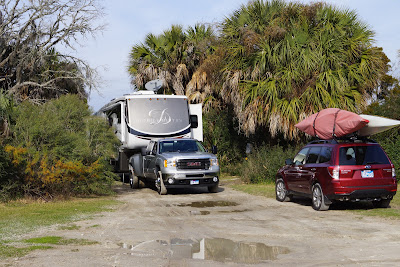 We’ve seen more raccoon tracks on their well-beaten paths elsewhere in the park too, but haven’t seen any in person.
The weather has been perfect for getting out on the beach, and we don’t have to drive anywhere for a great walk. This has made Kona and Rick very happy. 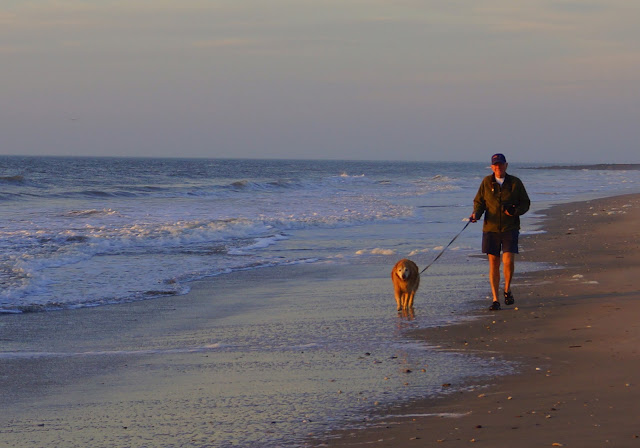 Edisto beach is known for its shells. We’ve seen lots of oyster shells, and a few whelks, usually partial, like this one. 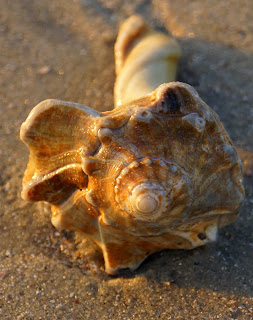 We’ve caught colorful sunrises and sunsets on the beach. 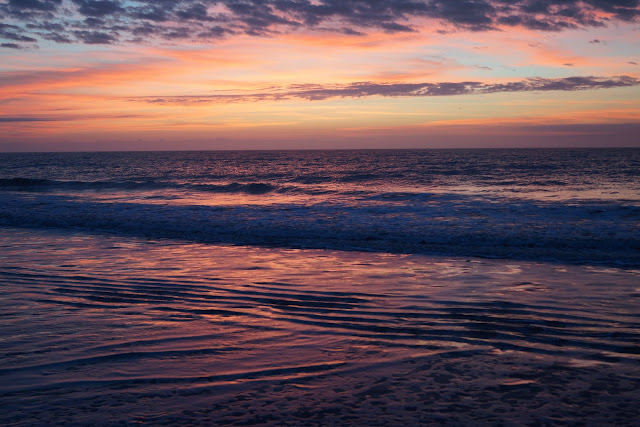 And an evening rainbow-sunset combination! 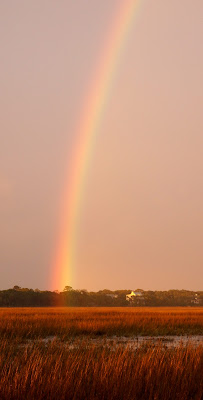 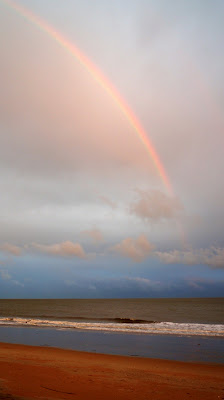 We saw this rainbow out our back window over the marsh, and then dashed over the dunes to the ocean to see the other end there!

The sillouhettes of the palms always make for a nice sunset shot. 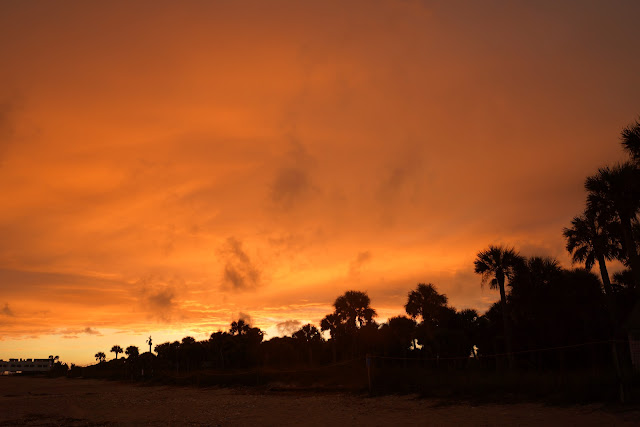 We spent much of yesterday at Botany Bay, where we saw some of the most unusual scenery since we’ve left the west. 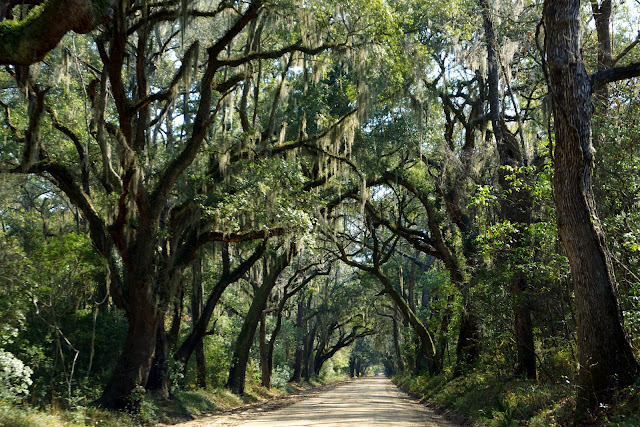 Botany Bay Rd. exemplifies the lushness of the landscape around the island. 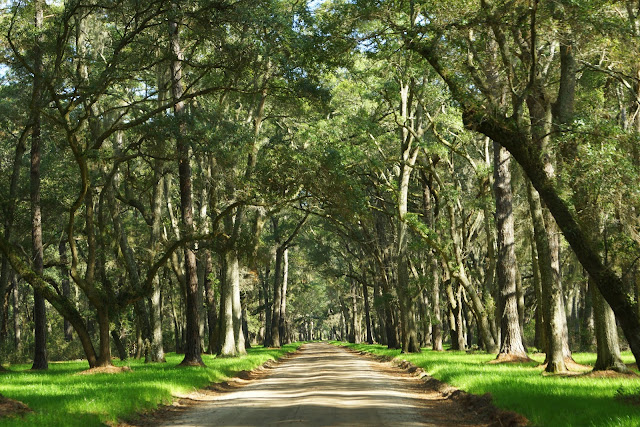 Admission is free, and a self-guided driving tour takes you through the Heritage Preserve/Wildlife Management Area (Botany Bay for short). It was created from two old plantations, the remnants of which are still visible in the roads, fields, and a few buildings, ponds and dikes.
In Picnic Pond, we had the good fortune to see a large alligator brumating amongst the duckweed.  (OK, I’m showing off.) 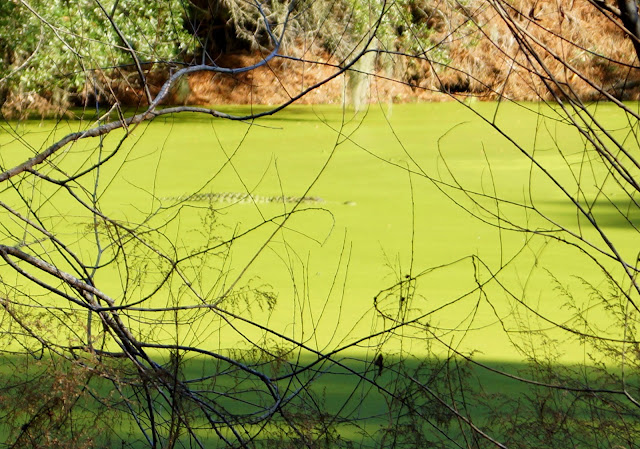 This is the ice house, one of the only structures left from the Bleak Hall Plantation. 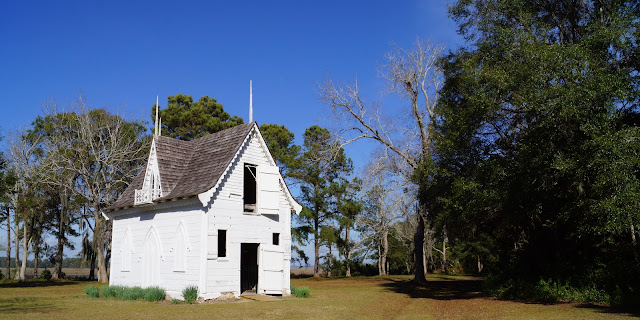 Another small structure, the gardeners shed, is partly in ruins, exposing the “tabby” of which is it constructed. This was a new one for us. Tabby is an old and very labor intensive form of concrete, with a high percentage of oyster shell. Here you can see just how much shell they used. 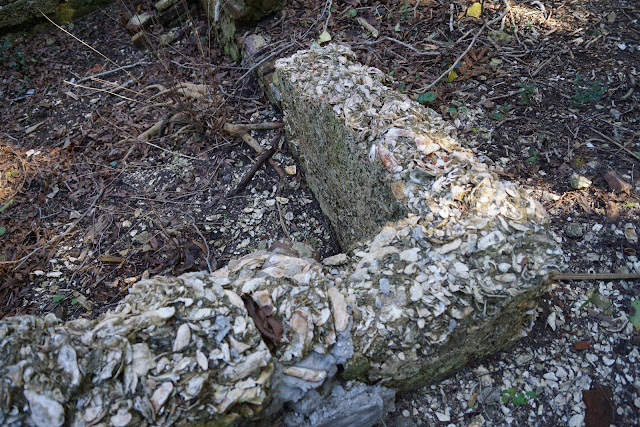 Visitors are welcome to leave their cars and walk around the Preserve, among the various ruins and natural features. While heading back to our car, we spotted this big guy hanging out on the gate. 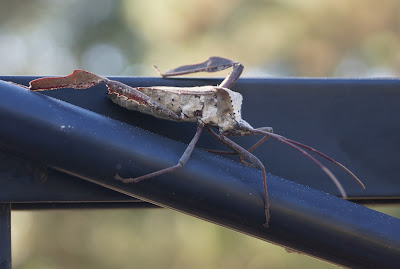 The highlight of the visit to Botany Bay though, was the beach.

It’s a very unusual one, with dead trees in the surf, exposed by erosion. 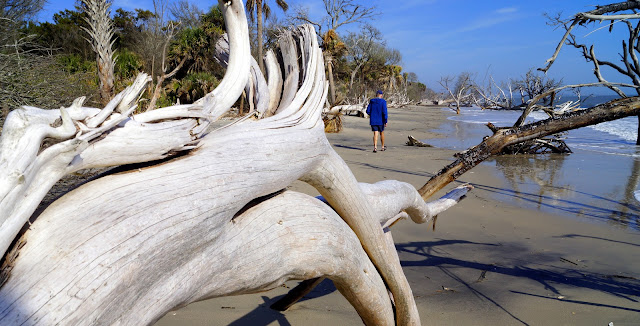 In some places I felt like I had stepped into Ingmar Bergman’s The Seventh Seal. 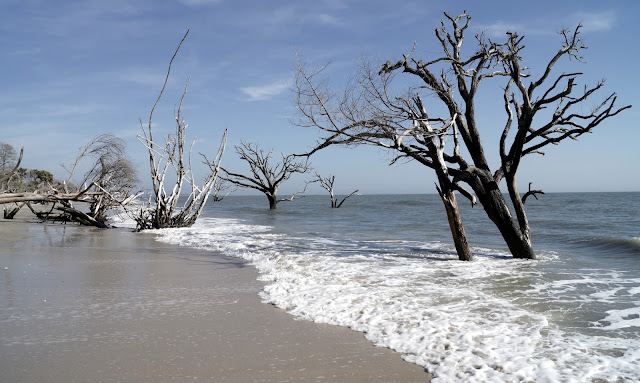 To top off our tour of unusual places, we passed the Mystery Tree on our way back to the park. It sits in the middle of a marsh, and no one knows who decorates it, but it changes with the seasons. It’s decorated for Valentines Day now. 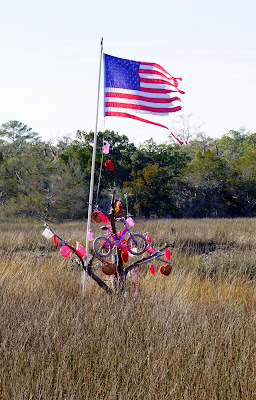 We leave Edisto tomorrow, and will stop in Woodbine, GA for the weekend, some Patriots football, and more unusual adventures.

Frampton Construction brings Andrew Myers on board as project executive