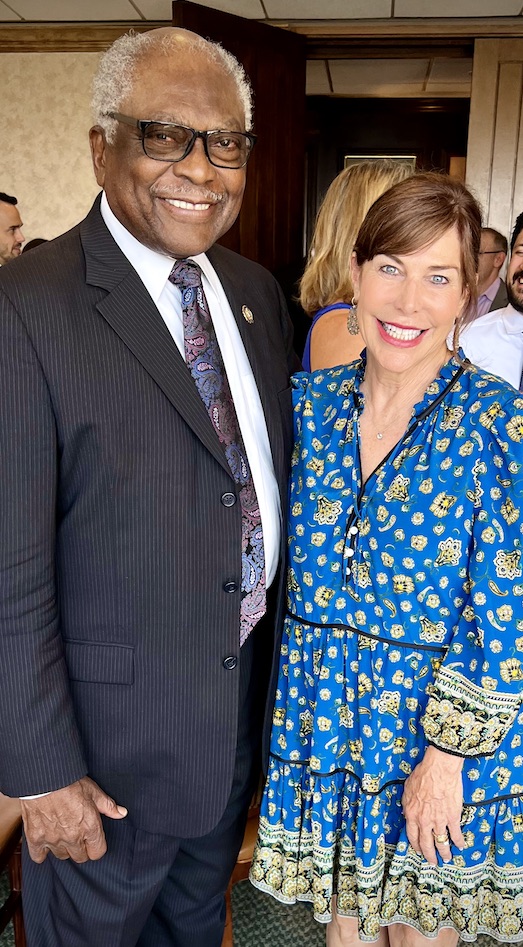 Following a $1M donation by a Texas-based couple,

Clyburn, 82, the first chair of the IAAM board and a long-term museum supporter, will be honored in the Carolina Gold Gallery, which will bear his name. He has served 15 successive terms for South Carolina’s 6th Congressional District, where he is currently serving as House assistant Democratic leader and previously served twice as majority whip. He is the third ranking House Democrat.

The dedication gift was made by Lynne Dobson and Greg Wooldridge of Austin, Texas, whose foundation, Tejemos, supports social justice and civil rights causes, constitutional freedoms, and education. The highly anticipated museum is set to open in 2023.

“I am honored to have a piece of this historic museum named in my honor. I am extremely thankful to Lynne and Greg for their contribution to the continued development of the International African American Museum,” said Congressman Clyburn. “My hope is that those who visit will leave with a more complete understanding of African American and American history.”

Dobson, daughter of the Whataburger restaurant founding family, created the Tejemos Foundation with her husband in 2020. She met Congressman Clyburn at a luncheon in Austin last spring. She said, “Rep. Clyburn has always inspired me with his many years of devoted public service for our country, especially his tireless work to ensure that the needs of Black Americans are heard, and their contributions are recognized. We are passionate about supporting people and institutions like IAAM, who are dedicating resources to exposing injustice and telling the whole truth of our history.”

The Carolina Gold Gallery, which includes both the Carolina Gold Exhibit and the Memories of the Enslaved Exhibit, offers a look at the transformative impact of enslaved people whose labor shaped and built the lucrative rice industry. Carolina Gold, a variety of African rice, was a staple in South Carolina until the late 1920s. The exhibit not only examines the root of the plantation systems, but it also acknowledges the ingenuity that Africans, from the western region, brought      to this nation. Through perseverance and resistance, African Americans were able to engineer community and shape the geography and economy in the Lowcountry.

The gallery examines the brutality of chattel slavery by utilizing the experiences of these people while demonstrating the idea of turning exploitation to triumph. A notable object illustrative of that time is “Ashley’s Sack,” which is on loan to IAAM from the Middleton Foundation.

Ashley’s story is that of a nine-year-old enslaved girl who was sold in Charleston in the mid-1800s and then separated from her mother, Rose. Knowing the separation was coming, Ashley’s mother gave her a cotton sack filled with a tattered dress, pecans, and a braid of Rose’s hair. Although she never saw Ashley again, the sack would later become an intergenerational connection to Rose’s descendants when it was handed down to Ruth Middleton, Ashley’s granddaughter. In 1921, Ruth embroidered her story on the sack, and it has come to be known as “Ashley’s Sack.”

“Ashley’s story will be one of the hundreds of untold and under-told stories we will share in the museum,” said Dr. Tonya Matthews, IAAM president and CEO. “Her story, like many of the others featured throughout the Carolina Gold Gallery, is a shining example of courage, persistence, and resilience, so it’s fitting that we honor Congressman Clyburn in it. From the start, the congressman has been a huge advocate for these unheard voices and stories. We feel tremendous gratitude to Lynne and Greg for helping us do that with their generous gift.”

“IAAM’s unwavering mission is to provide an authentic outlook on the African American journey as one that embraces the power of pressing past circumstances and rising to the occasion. The opportunity to serve as one of the nation’s newest platforms for the disruption of institutionalized racism would not be possible without the unwavering support of leaders like Congressman Clyburn, who as a civil rights leader himself understands firsthand these untold experiences and the ancestral sacrifice,” Matthews added.

ABOUT THE INTERNATIONAL AFRICAN AMERICAN MUSEUM

The International African American Museum (IAAM) is home to the African Ancestors Memorial Garden, the Center for Family History genealogy research library, nine core galleries, and special exhibitions space. The museum explores the African American journey through transformational storytelling of the achievements of African Americans in national and international contexts, exhibiting how the ingenuity, labor, resistance, and culture of a people have shaped every aspect of our world. Located in Charleston, S.C., the museum has reclaimed the historically sacred site of Gadsden’s Wharf, one of America’s most prolific slave-trading ports.

The International African American Museum is a champion of authentic, empathetic storytelling of American history and is thus one of the nation’s newest platforms for the disruption of institutionalized racism as it evolves today. Set to open in early 2023, IAAM’s mission is to honor the untold stories of the African American journey at one of our nation’s most sacred sites. The museum is an independent 501c3 non-profit organization. For more information, please visit iaamuseum.org or call 843-872-5352.